Note:  The Orkney Islands make up an archipelago consisting of over 70 islands that lies 9.9 miles north of the Scottish mainland where the North Sea meets the Atlantic Ocean. From Scotland, they are accessed by ferry.

The NorthLink ferry leaving Stromness for the Scottish mainland.

(The Island of Hoy in the background)

To spend time on the Orkney Islands is to step into the mists of time.

These islands teem with the shades of ancestors who settled here over the course of thousands of years.  Of necessity, they were tough, resilient people who lived and loved; laughed and cried; worked and played while battling the ferocious winds and wild waves of the  North Sea and the North Atlantic ocean. Yet these residents of ancient times are not gone but very much alive in their present day Orcadian descendants and the wealth of physical evidence they left behind.

Today’s inhabitants live contentedly surrounded by stone age monuments, burial mounds, chambered cairns, neolithic village ruins, middens, burial chambers and all manner of artifacts and physical evidence left by their  forerunners. To these they have added their own monuments and grave yards as each generation joins the long, long line of ancestors, pagan and Christian, Scots, Norwegian, Viking, Norse, Pictish, Neolithic, Paleolithic. The line stretches back thousands of years, and back, and back, into the mists of time.

The west side of Mainland Island

Mainland is the largest of the seventy Orkney islands, only twenty of which are inhabited.  It is home to the Orkney capital, Kirkwall, as well as, much smaller, Stromness, the port serving the west of the island.  75% of Orkney’s 21,850 residents live on Mainland.  I did not have a chance to spend time in Kirkwall, on the east coast of the island while I was visiting, but was able to see a good bit of  west coast Stromness. This first account is only a tiny taste of the treasure trove that is Orkney.  The weather was wet or overcast while I was there which made for more somber photos.  In fact, the local people are the most welcoming and forthcoming that I have ever encountered and there is a wonderfully positive vibe about the place. The population of Stromness is around 2,200.

There is a great bus service from Stromness to Kirkwall and other parts of the island.  Ferries from Kirkwall run to many of the outlying islands.  The ferry to the neighbouring island of Hoy, the only mountainous island of the Orkneys, leaves regularly and makes a fine day trip possible.  During my few days there, I was only able to visit a few of the overwhelming number of places of interest.  Using public transport as I do, it will take many trips to cover everything on my list.

The Brough of Birsay

The Brough (from old Norse word meaning ‘fort’) of Birsay is a tiny, tidal island in the Sound of Birsay, cut off from the mainland at high tide.  A natural causeway was, until recently the route of access. However, a concrete walkway has now been constructed. 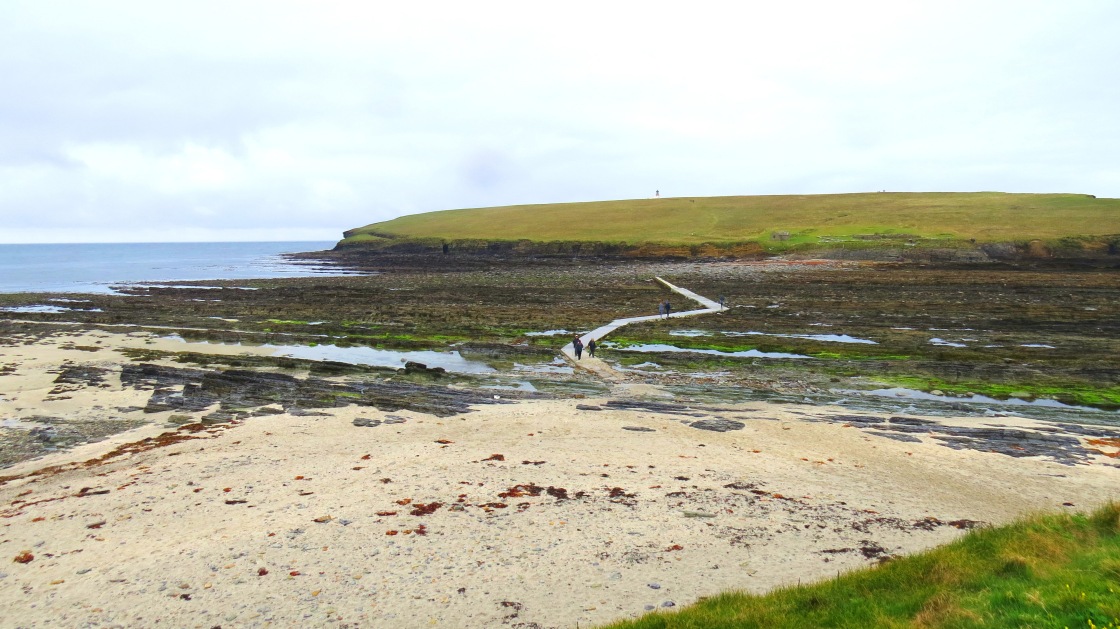 The causeway leading to the Brough (Fort) of Birsay

The beauty of the pools, kelp and rocks on either side of the path made the walk a joyous experience.  Many of the rocks looked like an artists handiwork. 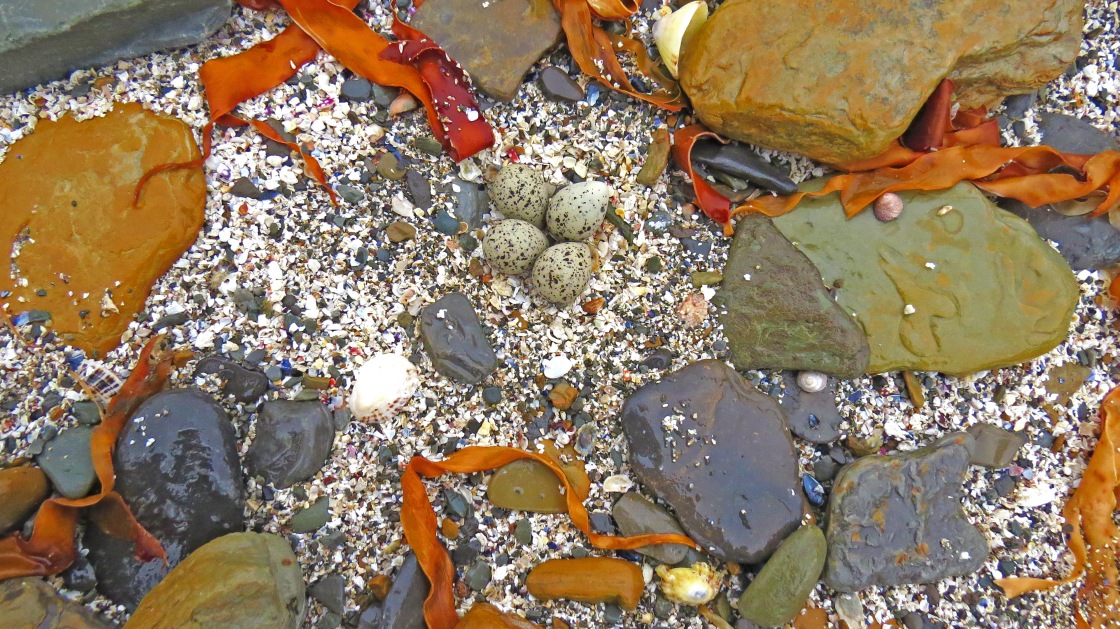 An abandoned clutch of seabird eggs on Birsay beach 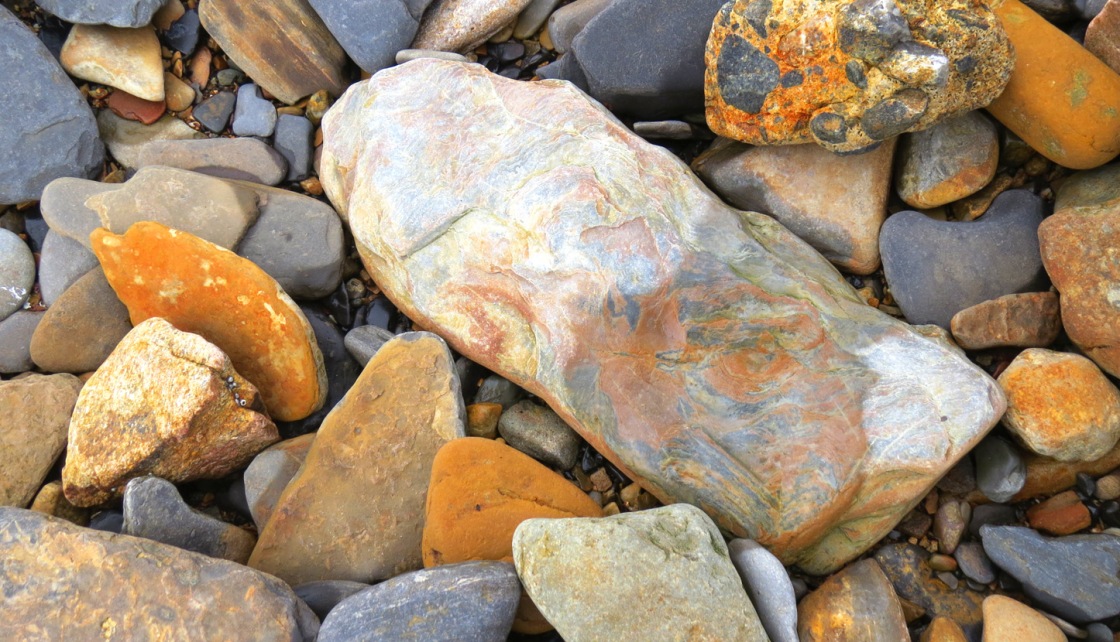 This tiny, tidal island was the religious and political seat of power for all of the Orkney Islands until the 12th century when control moved to Kirkwall, present day capital.  As far back as the 7000B.C. it was a place of importance and, centuries later, was the home of Thorfinn The Mighty and his affluent subjects.  Evidence suggests they had the luxury of a sauna.  The plaque at the site gives a wealth of information.

Close up of plaque section

In 1935, archaeologists uncovered a Neolithic Pictish symbol stone dating back to that time, 9,000 years ago. Sadly, it was broken into three pieces, but fortunately, the art work was still beautifully preserved.  It appeared to have been deliberately smashed.  The original was around 6ft tall and is now housed in the Scottish Museum in Edinburgh but a smaller replica marks the site where it was found.  Three Pictish warriors grace the bottom portion but the poor light and rain when I took the photo gave a less than perfect result. Rather than borrow someone else’s image, I am posting my own.  Archaeological finds have shown this little fortress was also the home of bronze brooch making.  It appears some of the designs were taken from ancient Pictish artwork, some of which can be clearly seen on the stone. Beneath the beautiful brooch-like designs is the sea eagle, important  to the ancient Picts as well as many later settlers.

A small well from this early Pictish period has survived intact with later settlers making use of it.

Norse church from 7th century and remains of monastery that was built over a Pictish graveyard.  The Pictish symbol stone was found beside three graves inside the perimeter walls.

Picts lived here from Neolithic times until the 7th century A.D. when the Norse took over.  It is thought possible that Picts and Norse lived peaceably together for some time. That the early Norse Christians left the Pictish symbol stone within the walls of their monastery would give credence to that. 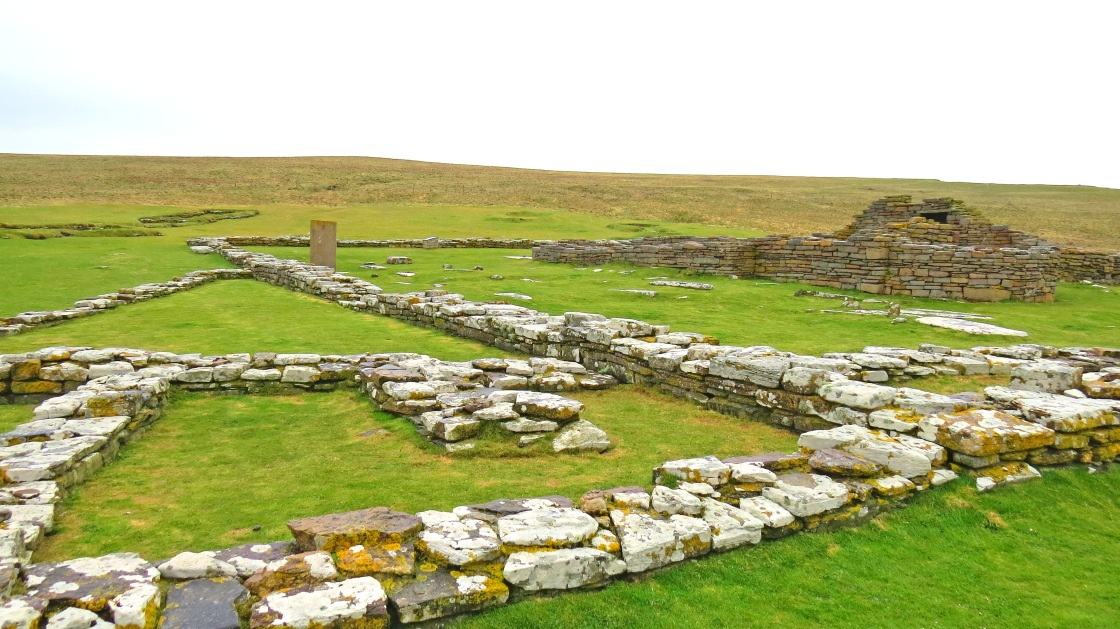 The ancients are long gone but they live on in the wealth of relics they left behind. One gets the feeling that this, like the rest of the Orkney Islands, was a place of tolerance for the ‘other’.  There does not seem to have been wanton destruction of abandoned property.  Rather, the later residents either made use of what they inherited or worked around it – as the present day Orcadians still do.  While much was buried, it appears to have been treated with respect by the newcomers of the time. I think there can be nowhere else on earth where such a countless abundance of relics and ruins remain to tell us the stories of who we are.

The Brodgar Peninsula is a narrow isthmus of land about 6 miles north of Stromness on Mainland Island.  It lies between two lochs, Loch Harray, fresh water and Loch Stenness, a brackish sea loch with water varying in salt content. It is the only one of its kind in Britain.  A narrow road bridge marks the place where the two meet.  The U.K.’s oldest standing stones, the Stones of Stenness, are situated close by and the single Watch Stone stands guard at the bridge entrance.  The photo above was taken when I was heading off the peninsula.

For thousands of years, this peninsula appears to have  been a place of great spiritual significance.  Concentrated in the 2 sq. ml. area are myriads of ancient, well-preserved sites that once were of great ritualistic importance.  Like most of the Orkneys’ ancient past, most of their history is shrouded in mystery.  For every  fact we know or can surmise, many more are lost forever in the mists of time.  Today, as the photo of the bridge above illustrates, life goes gently on amidst the echoes of those long gone voices.  It is surprising that the Orcadian people, most of whom are descended from Vikings, best known for raiding and pillaging, are averse to conflict and discord.

I took the bus from Stromness to the junction of the road leading to Brodgar.  Sea mist softened the landscape and gave my search for ancient places added atmosphere. Mainland Island is mostly farmland.  Most cattle were still inside in their winter quarters, but sheep were a common sight.  Wildflowers bloomed in profusion, especially wild primroses – more vibrant life among the long departed.

Farmland on the way to Brodgar.

About a quarter mile from the bus stop on the main road, the Stones of Stenness mark the place where the two lochs join and, in times gone by, the sacred land began. Less than a mile further on brought me to what are considered the most sacred site of its time, the Circle of Brodgar, the largest group of sanding stones in the area.  Many of the original stones are gone, lost to the elements.  Some have recently broken and fallen but enough of them remain to show us the perfect circle.

Part of the Ring of Brodgar

The center is, today, covered with heather, winter brown when I was there but green in summer and purple in Autumn.  It is thought there are buildings under the topsoil, but, for fear of damaging the stones, no one attempts to unearth them.

This place, echoing with the silence of the long departed, is an awesome reminder of our own insignificance in the big scheme of things. It brings a feeling of unreality, especially when experienced alone and on a misty day.  This ‘out of this world’ feeling was abruptly interrupted as I reached the bottom of the hill on my way back.  There, across the narrow road,  small boats and trailers were lined up on the shore of Loch Harray, witness to recent angling activity.  Somehow, they seemed incongruous here, as though the present was abruptly thrust into the long ago.

On my outward walk I had seen an angler wading far out into the loch.  I have since learned that this body of water teems with fish, particularly pink fleshed trout and salmon.

An angler heading in to shore

The examples of standing stones shown in the photos above are only a few of those in this small area and but a tiny fraction of those island-wide.  One reason the Orkneys have so many megaliths, is possibly because of the abundance of giant stone slabs littering local beaches. Tidal action has eroded sand dunes and exposed countless piles of large flat rocks of various kinds that show the bedrock formation of these islands.  This also explains why all but one of the group is flat.

Rocks on Birscay beach (with some modern day ‘sculptures’ on display)

(Note the bank above where erosion continues)

Warbeth beach with Hoy in the background.

How the ancients moved these giant slabs of stone has often been pondered.  A local Orcadian told me it is no mystery.  The stones were pulled along a path of seaweed.  That is an interesting theory.

Where to stay:  For people on a budget, there are a few backpackers’ hostels.  I stayed at Brown’s Hostel in Stromness in early May and was very snug in my comfortable single room.  There is free wi-fi in the kitchen/dining room and one can get a phone signal there but not in the bedrooms.  I think the walls are too thick.  Outside, the signal is fine.  This hostel is small and cosy with a lovely relaxed air, no doubt due to the owner, Mrs Brown, a local Orcadian, who is a charming hostess.

For those looking for something more luxurious, there are several hotels on the island. Angling enthusiasts favour the Loch Harray Hotel situated on the shores of the loch so famed for its abundance of fish.

However you get there and wherever you stay, the Orkney Islands will intrigue you.  One visit is never enough.

Wikipedia has comprehensive, scholarly articles on all three categories. The links below are to sites more suited to general readers.