It’s March now and, once again, snowy.  Yesterday, however was different – hail showers and gale force winds.  I took myself off to the loch to try to get some pictures of a different mood than the ones already posted.  While the images in the videos were fine, the wind was so strong it sounds like REALLY loud static as it rushed past the little microphone on my camera.  During a short lull I did manage to get one or two with only the sound of waves and water.   Here they are.  At the start of the first one, you may hear some wind for just a short time before the lovely sound of breaking waves takes over. 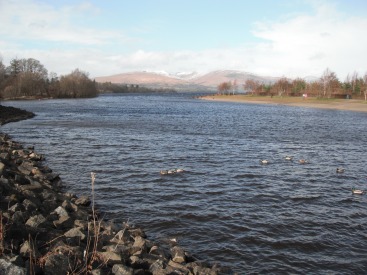 March really did live up to its reputation when I took this series of images. The hail clouds were being driven at such a pace across the sky that the colour of the water was changing rapidly, often by the moment.  My little camera was having difficulty keeping up with the rate of colour change.  You can see a marked example of this in the ‘Waterfall’ video following. 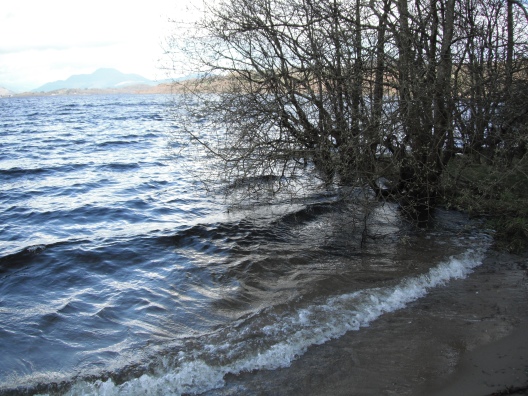 The Edge of the Loch

Having explored the end of the River Leven, I returned to its source, Loch Lomond.  I wanted to capture images of Spring’s new growth.  The best place to do this was on the banks and in the woods bordering the loch.  I’m posting some of my favourites.

One day, when it’s not windy, I’ll go back and make a video of this babbling brook. I just love the sound of it.  This little stream winds its way through the woods, ending in a cascade that empties into the loch.  Scroll down, and you’ll find the video I made of the waterfall in March.

When I look at this image, it evokes conflicting emotions.  Sometimes, there’s the joy that always comes when seeing the sprouting of  Spring’s new growth, particularly after this past, long, arctic winter;  admiration and wonder at the tenacity of the daffodils and an altogether ”peaceful, easy feeling”.  At other times, there’s a feeling of melancholy.  Having examined this, I think the aloneness and otherness of the flowers perhaps strikes a chord.  I do believe there is a story lurking somewhere.

Woodland covers much of the banks of Loch Lomond, well named ”The Bonnie Banks” and immortalised in a universally recognised song.  The incessant winds of March and April have kept the water choppy.

A few feet away, a path follows the progress of the stream through the woods.  With no one else in sight, I was undisturbed and free from distractions.  I was conscious of a vague feeling of deja vu.  It wasn’t until I was home and checking out the many photos I’d uploaded into my computer, that I realised from where the feeling came. It was another stream, another path, another Spring, another time, many years ago.  I’ve started a new page to record that story.  It may be called  ”Fairy Gates”.  I’ll post it as soon as it’s finished.

This morning, I took the twenty-five minute bus ride up the loch to the village of Luss.  Foul weather this month has stopped me taken many pictures, so clouds aside, I took advantage of a couple of rain-free hours to finish my pictorial record of the month of May.  Storm clouds dominated, but the wind also gave it a rest.

Their has been a village on that site for at least a thousand years.  It used to be called ‘Clachan Dhor’, Gaelic for ‘Dark Village’.  Some say the present name came from the Gaelic word for a flower, but it more likely came from the French ‘Fleur de Luce’.  The story goes that a Frenchwoman , following her wishes, had her body brought to Clachan Dhor for buriel.  Fleur de Luce was her flower of choice for the interment.  The flowers reproduced and later bloomed atop her grave.  It was believed they had healing properties that cured a sickness in the village.  For more detail on this and other historical facts, click on the link at the end of the page. 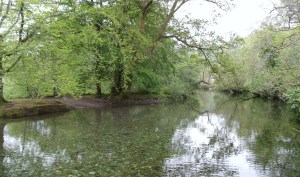 At the edge of the village, the shallow River Luss flows out of the loch.  In the video below is the sound of a bird’s song.  I wish I knew what kind of bird it is.  If anyone viewing the video can tell me, I’d be obliged if that person could leave me the answer in the comment section at the end of the post.

Pipers at the Firth

The third Saturday in May saw the Scottish Pipe Band Championships held in Levengrove Park, Dumbarton.  In spite of high winds and lashing rain, the good spirits and celebratory mood of specatators along with the excellent playing of the pipers and drummers gave a festive air to the proceedings.

The wonderful sound of the pipes played by the Central Scotland Police Band can be heard in the video below.