Born of fire and ice, Glencoe is an area of mountains, hills, lochs (lakes)and glens (valleys).  Volcanic action formed the wild, rocky terrain, with movement of the earth’s plates later crushing the rocky surfaces together to form rugged hills and mountains.  At the end of the ice age, the huge glacier that sat atop what is now Rannoch Moor, moved, as it melted, gouging out Glen Coe and creating a network of valleys and depressions where lochs (lakes) formed.  But along with the scientific facts and the geological history which produced the amazing results evident today, there is an undeniable, other-worldly aura about this place.

The shores of this fresh water, inland loch within the glen are littered with rocks of subtle colours, giving, even a snowy winter lanscape, the warmth to prevent bleakness.

Glencoe has a tragic, bloody history that adds to the air of eerie desolation often felt here and has earned it the title ‘Glen of Weeping’.  In the winter of 1692, a massacre took place, during which, most of the Glen’s inhabitants were murdered as they slept, while others fled to the hills and died from exposure.  It was a shameful act of betrayal and butchery against the Macdonalds of Glencoe, ordered by King William III, crafted by John Dalrymple, Master of Stair, and carried out by a member of the king’s army, Captain Robert Campbell of Glenlyon.  Many people believe that the spirits of the victims still inhabit the Glen and can be heard crying and wailing, especially on February 13th, the anniversary if the slaughter. 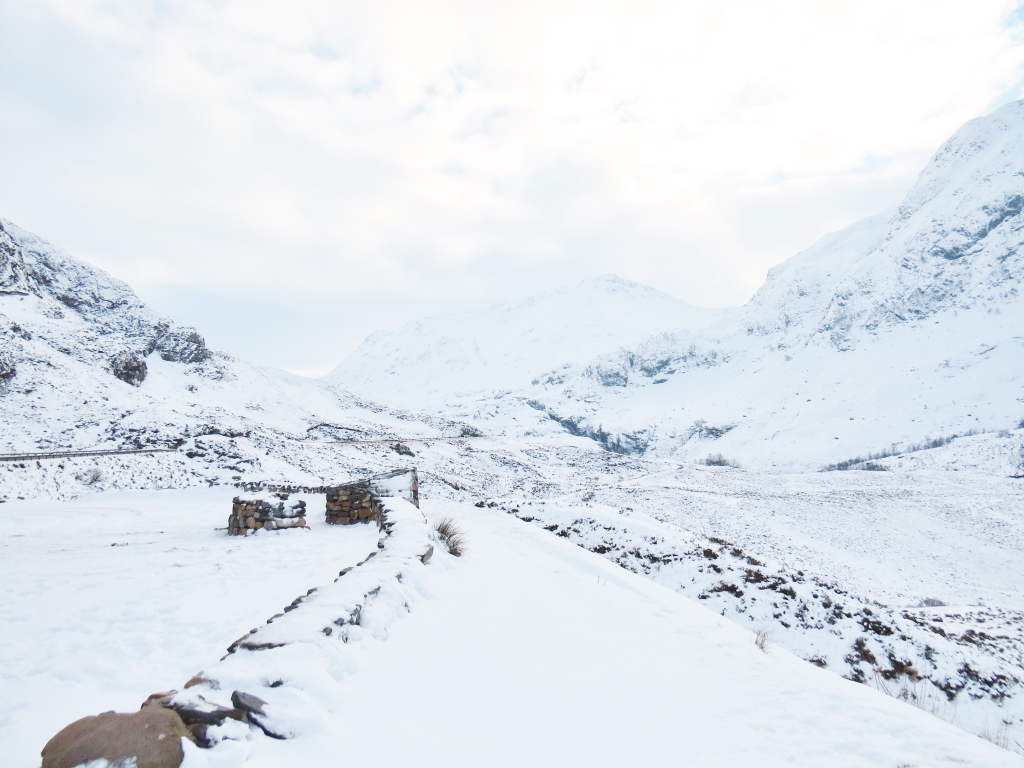 Road Past The Three Sisters

(with Buichaile Etive Mor in the background)

That is not the only way Glencoe presents itself, however.  It has many faces.  I caught it in one of it’s rare, gentle moods.  Most often it is known as a place of great beauty and grandeur, but mist shrouded, desolate and eerie much of the time.  (See ‘Joyful Journey, Part 2’)   For many, like myself, it is loved in all its moods.

Loch Leven and the mountains of Glencoe

An inlet from the Atlantic forms the salt water, tidal, sea loch known as Loch Leven.  It has a varied coastline, from wooded to slate-covered as in the photo above.

Note:  Due to icy road conditions, on this visit, I had to keep to roads more travelled. As a result, the photos contained in this report show mostly the edges of Glencoe.  Once the back roads are safe and open, I will return to record the heart of the glen.

The floor of Glencoe has areas fertile enough to support a few crofts. (small farms).  Arable land is in short supply but sheep graze on hillsides and grassy fields.

Glencoe is not known for its gentleness, however.  At their worst, the hills and mountains are death traps.  Weather conditions change without warning, the capricious nature of wind, rain and cloud seemingly bent on catching the unwary.   Experienced climbers have perished, lost while challenging elements and terrain that draw them like magnets.  Even the stubby, non-threatening-looking hills known as ‘The Three Sisters’ must be treated with respect.

Glen Coe is situated beside and below Rannoch Moor, a vast, wild, ancient unspoiled area of peat bogs and lochans.  Like the glen, closely attached to it both geographically and geologically, it is loved and hated.  Desolate and threatening in bad weather, inviting-looking when the sun occasionally shines, always deadly for anyone trying to traverse it over anything but the one road and few pathways available – a glorious prehistoric adventure. (See ‘Joyful Journey, Part 3′ for images and details of  Rannoch Moor).

Close to Glencoe, at the Glencoe Mountain Ski Resort, modern activities prevail in the wilderness.

While Rannoch Moor and Glen Coe are almost devoid of creature comforts, the surrounding area has a fair supply of accommodation and facilities.  Glencoe village boasts a shop, café and several assorted businesses.  Two hostels cater to the outdoor types while a hotel at Glencoe Village offers more luxurious quarters.

I stayed in Glencoe Independent Hostel’s cosy wood cabin and highly recommend it.  Apart from the hostel, there is a sleeping barn, cabin and several caravans to choose from.  The business is owned by a delightful young couple, Keith and Davina Melton who maintain a relaxed, welcoming atmosphere.  Proprietor, Keith, also runs GoGlencoe, a guiding business.  Without his help I would have been unable to take the photos featured in this report.  With his intimate knowledge of the area, he guided me to places I requested and others he recommended.  He also drove me to the best viewpoints, given the icy conditions.  I plan to go back when the back roads and lanes are clear to explore the heart of the glen, again, with the help of GoGlencoe.

Cabin and caravans at Independent Hostel

The ski centre at Glencoe Mountain also has accommodation – chalets – and a good sized restaurant.  It is open year round.

There is also a SYHA hostel, The Glencoe Youth Hostel, a short distance from the Independent.

The King’s House on Rannoch Moor which featured in Joyful Journey, Part 2, has changed hands since my stay there, so I have no knowledge of how the new owners operate.

How to get there:  If you are using public transport, take the Fort William, Isle of Skye, citylink bus from Glasgow or Edinburgh.