For LOCH LOMOND LIMERICKS AND LIFE, CONTD. click on ‘Islands And Their Stories’ link below

Islands And Their Stories

It is the only rotating boat lift in the world.  It is the largest functional sculpture ever.  It is astounding in its simplicity.  It is excellence in design.  It is ingenuity in engineering.  It is the ultimate in green energy.  It is gracefulness personified. ‘It has to be seen to be believed’.  It is the Falkirk Wheel.’

The video above is one of a series I made when on a trip on the Falkirk  Wheel.  Before posting the entire video record of the trip, I am giving some technical information with photos and a couple of videos to illustrate the text.  It is impossible to imagine from words alone just how this amazing machinery works.

Everything about  the design of the wheel is simple – from the supporting arms, reminiscent of the Celtic, double headed axe to the two streamlined tour boats.  Operating on the Archimedes Principle, the technology of the equipment that drives the lift is awesome in its simplicity.  In two words, the Falkirk Wheel is elegance personified. 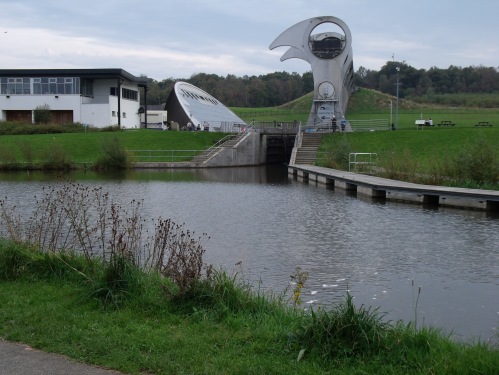 The Wheel From The Forth and Clyde Canal

The grass covered ‘hill’ mid-right is the Roman Antonine Wall

The Falkirk Wheel was opened in 2002 and is located in Central Scotland near the town of Falkirk. It connects two canals, the Union and the Forth and Clyde.  Previously these were connected by a series of eleven locks.  To negotiate all of them took many hours.  When the canals fell into disuse in the 1930s, the area of the locks was filled in.  The canals have been re-generated for leisure purposes and the wheel allows passage from one canal to the other in a few minutes.  The Union Canal is 24 metres (79ft) higher than the Forth and Clyde.  That’s about as high as an eight storey building.  The boat lift doesn’t quite replace all the original locks due to the presence of the ancient Roman Antonine Wall.  Unable to build atop this valuable relic, the engineers obtained permission from the National Trust to build a tunnel under and at the bottom of the wall.  It is called the Rough Castle Fort Tunnel after the nearby Roman wall fort, Rough Castle Fort which is the best preserved of the few remaining Antonine Wall forts. ( Information, illustrations and links to my sources’ web sites can be found after the videos.)The new length of canal empties outside the tunnel into a basin.  Into this, through another tunnel, flows the Union Canal boats having had to descend through only two locks to meet with its Southbound counterpart.  To get to the same level as the Wheel, the Forth and Clyde boats have to rise up a step via one lock.  (See photo above) 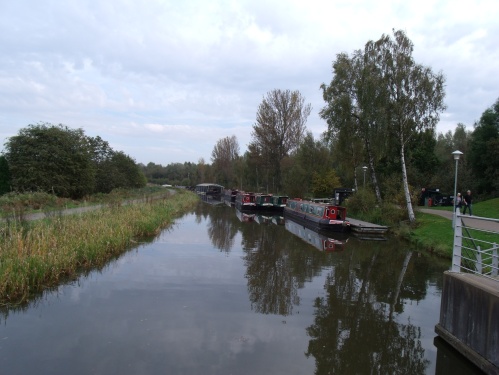 Forth And Clyde Canal

The only way to really appreciate the genius of the rotating lift is to take a boat trip on it.  I did so a few months ago, recording the journey on video.  There are many short videos which is a bit aggravating.  Fewer, longer ones would have been better.  One day, I’ll go back and re-do it but, for now, I’ll use what I have.  There are several good internet sites that give, in great detail, the technical information of the design and workings of the wheel.  These give the relevant facts much better than I ever could.  All external links to my sources can be found in the grey sidebar to the left of the page. 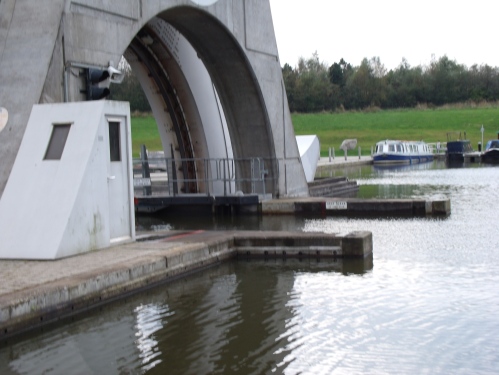 Wheel Base And Entrance To Gondola

Following are technical details I found in Wikipedia, punctuated at relevant places with my videos demonstrating key parts of the text.

‘The wheel has an overall diameter of 35 metres (115 ft) and consists of two opposing arms which extend 15 metres beyond the central axle and take the shape of a Celtic-inspired, double-headed axe.  Two sets of these axe-shaped arms are attached about 35 metres (115 ft) apart to a 3.5 metre (11 ft) axle.  Two diametrically opposed, water-filled caissons (gondolas), each with a capacity of 80,000 imperial gallons (360,0001;96,000US gal), are fitted between the ends of the arms.

These gondolas always weigh the same whether or not they are carrying their combined capacity of 600 tonnes (590 long tons;660 short tons) of floating canal barges as, according the Archimedes’ Principle, floating objects displace their own weight in water, so, when the boat enters, the amount of the water leaving the gondola weighs exactly the same as the boat.  This keeps the wheel balanced and so, despite its enormous mass, it rotates through 180 degrees in five and a half minutes while using very little power.  It takes just 22.5 kilowatts (30.2 hp) to power the electric motors which consume just 1.5 kilowatt-hours (5.4MJ) of energy in four minutes, roughly the same as boiling eight kettles of water.’

How the gondolas are kept level

‘The gondolas (caissons) need to rotate at the same speed as the wheel but in the opposite direction to keep them level and to ensure that the load of boats and water does not tip out when the wheel turns.  Each end of the each gondola is supported on small wheels which run on the inside face to the eight-metre-diameter holes at the ends of the arms, allowing the gondolas to rotate.’ (see video following) 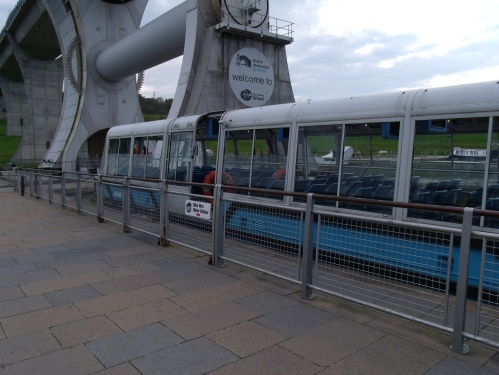 Following is a video record of my trip on the wheel.  I found the experience surreal and quite mind blowing.

As signed, the aerial view of Rough Castle Fort below is by http://www.webbaviation.co.uk 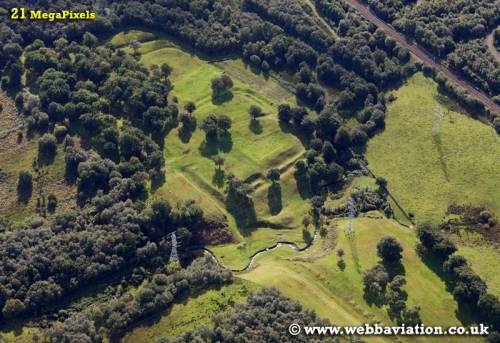 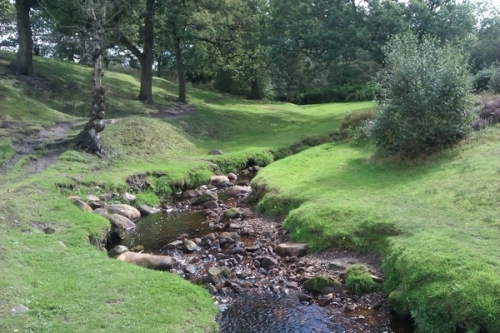 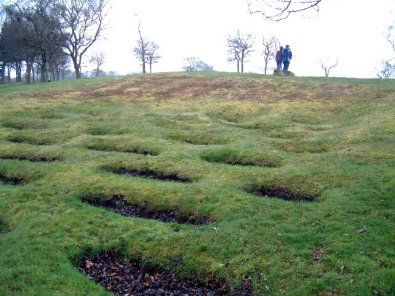 Per Wikipedia:  ‘These pits known as ‘lilias’, were a  defensive measure and would have been filled with sharpened spikes.’  Photo by Andrew Mitchell 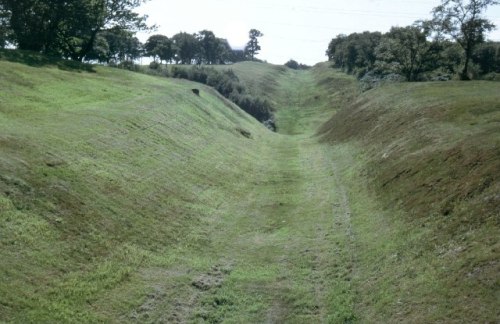 Photo by Patrick Ottaway: ‘The Antonine Wall at Walling near Falkirk.  The ditch is in the center and the remains of the turf wall on the left.’ 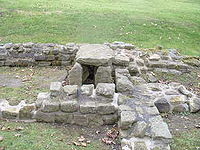 Per geograph.org.uk ‘A section of the Roman Antonine Wall across Scotland just west of the Rough Castle Fort.’  Photo by James Allan

Outside sources:  Links to these can be found on sidebar at top left of page.  They are well worth a visit.

4 thoughts on “Sailing In The Sky: A Video Trip On The Falkirk Wheel”